Sculpture As A Drawing Supplement


The process of modeling form while drawing is so similar to sculpting form in clay that it is beneficial to sculpt in order to enhance one's understanding of modeling form.  I only have experience working on one sculpture copy (which cracked into pieces before I finished it because I was not watering it consistently) but I will explain the process that I used for that sculpture copy in this post.  This post also describes how sculpting enhanced my understanding of modeling form while drawing.  Footnotes are included in this post to indicate which sentences in this post are summarizations of ideas that the instructors at The Cambridge Street Studios explained to me.

Sculpting Tools
I used a variety of tools while working on my sculpture.  Although I don't know the appropriate names for all of those tools, a description of the use that I made of each tool is described below.

- Used early in the modeling process to sculpt the general curvature of forms.  The pointy end on the bottom was used for drawing the shapes of planes and forms into the clay.¹

Rake- This tool comes in a variety of sizes to generally smooth out large or small planes of forms.¹

Knife- This tool comes in a variety of sizes to cut large or small chunks of clay from one's sculpture.¹  I used this tool mostly during the block-in stage of my sculpture copy.

- Used to flatten out planes of forms.  The pointy end on the bottom was used to draw the shapes of planes into the clay.¹

- Used to more specifically sculpt the curvature of a form.  The top pointy end was used to draw the shapes of planes into the clay. 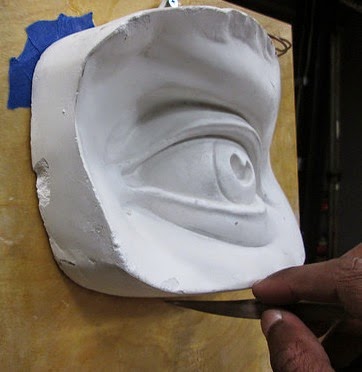 This tool was also used for measuring the depths, heights and widths of parts on the cast.¹

- Used to more specifically sculpt the curvature of forms.¹ 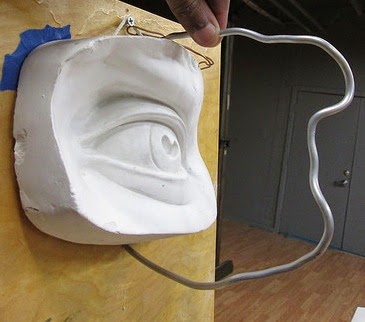 Wire- Used to measure depths, heights and widths on the cast.¹ 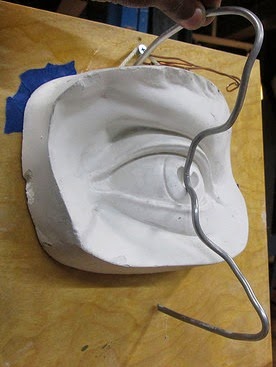 The cast and my copy were placed at the same height and placed on rotating tables so that I could angle the cast and my copy to view both in the same perspective while I turned my head back and forth from my the cast to my copy.¹  This was done to make it easier for me to copy the shapes of the planes that I saw on the cast.

I continued to evaluate the shapes that I saw on the cast in terms of animal shapes while sculpting too.¹   I would look at the cast and my copy from as many angles as possible to compare how opposed the planes were in relation to each other.¹  While making these evaluations I found it most helpful to view the forms in profile to get a clear view of how opposed the planes on a form were to each other.¹  Evaluating the opposition of planes in profile has been a great help in understanding the structure of forms while I am drawing as well. 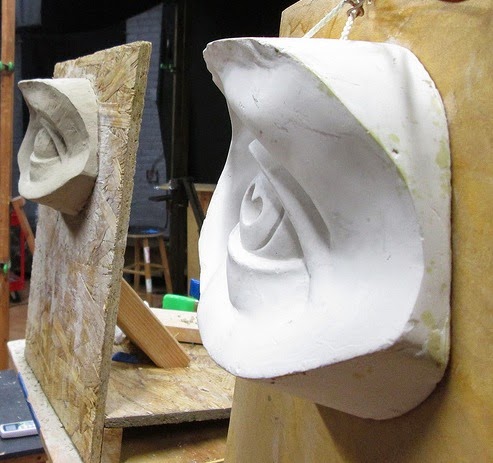 I then used the rake tool to flatten out the large planes on the cast.¹  This stage of the sculpture process is very similar to the stage of drawing when I draw a few planes in strip of form before more subtly modeling a strip of form.  During this stage it was very important for me to make the large planes very flat and clearly delineated in order to easily evaluate the relations of the large planes to each other.  This made me further appreciate the importance of making the planes in a strip of form very flat and specifically shaped in order to more easily evaluate the relation of planes to each other in my drawings.

This stage of the sculpture process made it very clear to me that specificity in the relation of planes to each other makes the final stage of subtly refining the forms much easier.  With sculpture it is very difficult to adjust masses of clay during the final stage of refining forms so I had to focus on the importance of the large planes as the foundation for the subtly modeled form even more.  I began seeing how specificity in the relation of the planes to each other while I am drawing makes the next stage of subtly modeling form so much easier.

During this stage I had to do much problem solving of how to bend or add to the clay on my copy to more faithfully represent the forms on the cast.  I usually would resort to taking depth measurements of the most projecting point on a form and the deepest point on a form so that I could check the accuracy of those points on my copy to get a better sense of the points that I would have to bend down or up from to make my copy more faithful to the forms on the cast.  This process very much informs the drawing process.  In drawing instead of taking depth measurements I would determine the value of the point on a form most facing the light and the value of the point on a form least facing the light to decide how I have to bend the form in my drawing to better represent the forms that I see.