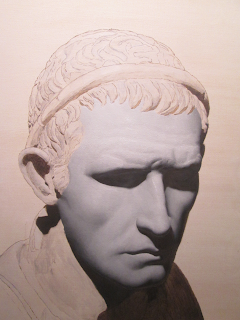 As far as I got on my cast painting of Antiochus III by the end of the first year at Grand Central Atelier.  I learned a lot this year.

My experience at Grand Central Atelier has been better than I could have imagined before I moved to New York.  GCA, including its core program and workshops/part-time classes I have taken there, is by far the best school for classical art education that I have ever studied at.  Not only do the instructors continually provide valuable insights into how I can develop my technique and problem solving skills but furthermore I am surrounded by a positive environment of students who are constantly improving and are willing to share advice.  Also there are so many amazing museums and exhibitions showcasing the genre of classical painting that I have desire to align my work with and viewing those pieces in person has provided invaluable learning experiences that will inform my art for the rest of my career.  I have found the art community at GCA and in New York to consistently re-iterate the fact that progress is limitless.

Some of the portrait drawings I worked on this year at school are shown below. 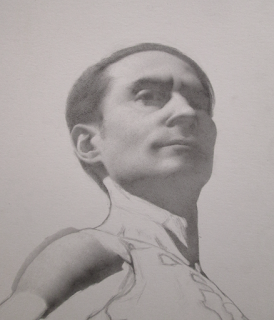 Santiago from the May afternoon pose

I have been trying to improve on gaining a stronger sense of the larger overall form of the head while working to incorporate smaller sub-forms, such as the eyes, in their proper relation to the portrait.  My teachers have been very helpful in making me aware of ways to appreciate and focus on this aspect of rendering.  Paying more attention to the larger form of the portrait at first also has made it more effective and easier to incorporate the sub-forms. 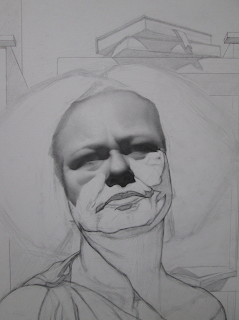 From the April afternoon pose (with added background and drapery)
While it is engaging to render, I have found that significant improvement lies in much comparison of my drawing in its relation to the subject, both in conceptual form and visual evaluation terms.  I have a tendency to constantly want to have my pencil to the paper or brush to the canvas.  Scott Waddell's advice this year was very helpful in organizing my working method to create better results. Getting into the habit of taking more time to evaluate my decisions has assisted in organizing the sub-forms to the larger overall forms in my portraits.  I noticed that the more I question whether I am getting closer to my goal the better I can see changes that need to be made. 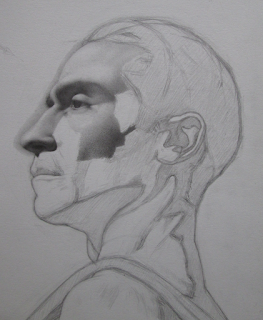 Santiago from the March afternoon pose

Thanks so much to the help from all of my teachers and peer students.  This year I am fortunate to have benefited from the teaching and advice from many of the instructors at Grand Central Atelier including, Scott Waddell, Patrick Byrnes, Devin Cecil-Wishing, Justin Wood, Brendan Johnston, Katie Whipple, Ted Minoff, Tony Curanaj, Josh LaRock, Jacob Collins, Colleen Barry, Will St. John, Zoe Dufour, Charlie Mostow, Sally Fama Cochrane and Katie Engberg.

I am very much looking forward to what awaits in my second year at Grand Central Atelier.

Thanks again to all who supported my art material fundraiser for school (The Arthur Haywood Education Initiative).  I am very fortunate to be learning so much with the supplies.
Posted by Arthur Haywood at 7:00 PM No comments: 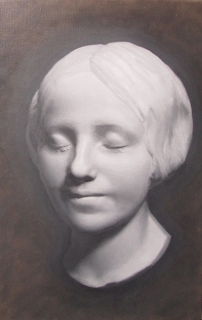 I have most recently been working on a cast painting of "L'inconnoue de la Siene"(the unknown woman of Siene) at Grand Central Atelier.   The alleged story behind this cast is that the mask of this young woman was casted from a drowned individual in the Nineteenth century because her face and expression was captivating and beautiful.

Radio Lab has a very intriguing podcast on the history of this cast here.  The mask became popular throughout Europe in the Nineteenth century and was later used as the basis for the model of the CPR doll.  The podcast is interesting as it refers to the relevance of this young woman who drowned to later becoming the model for mouth to mouth resuscitation.  Generations of people use the CPR doll to practice relieving individuals from drowning and in a sense bring them back to life.

In a similar sense, the approach to painting and drawing taught at Grand Central Atelier focuses on creating believable form to recreate the appearance of individuals.  I titled this painting "Believe" as it was my attempt to make this young girl believable again.  Although I did not nearly meet my goal with this painting I did learn a lot during the process.

I tried to believe in the dimension and reality of each form as I created it and worked my way throughout the portrait form by form. 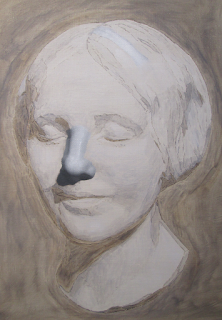 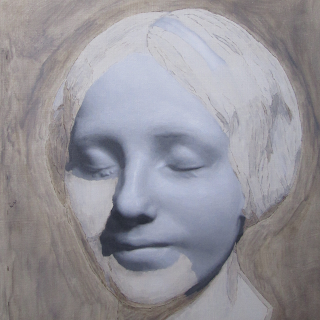 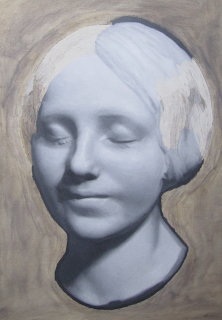 In my opinion, the more believable the subject of my painting can be the more deeply the translation of specific emotions can be conveyed to communicate specific messages in my art.  Although this painting is just a study the lessons learned from this exercise will allow me to more effectively communicate with my art when I create narrative paintings.

I did learn a lot of new beneficial practices while working on this painting from my instructors and peer students at Grand Central Atelier.  I learned of the benefits of using little bit of a leveling medium, such as Epoxide oil gel, to reduce the amount of textured paint strokes that can accumulate while continuing to adjust paint during the wet into wet painting process. I also learned that when too much paint accumulates on my painting it can be helpful to take a brush with less paint on it and tap into the area to remove the excess paint before trying to more carefully reapply a more specific gradation.  It was helpul to use a thicker amount of paint on this piece to be able to manipulate the paint longer without removing paint down to the surface of the linen.  The more I practiced I tried to get a feel for applying enough paint for it to glide over the weave of the linen.  I noticed that the texture of relatively thick paint initially applied is naturally smooth and when paint is applied so thinly that it is seen between the weave of the linen as opposed to on top of it, the irregularity of the surface creates a texture that is not smooth.

Also, a value painting workshop that us first year students had with Tony Curanaj allowed me to learn more about paint handling.  I learned that while much of making gradations with paint initially involves carefully placing progressions of tone with distinct values of paint that describe a curve of form, the gradation can be refined by carefully dragging those specific tones into each other.  Even though this process can help , I still have to be careful to not completely remove needed paint while blending.  As far as reworking and seams go, I still have yet to figure that out, as my painting is filled with seams.  But while reworking I did get a glimpse into how much refinements can be guided by a feel for what to expect the paint to look like after it has dried and been varnished.  Hopefully if I can be more careful during my initial pass and during reworking on my next painting I will improve.
Posted by Arthur Haywood at 11:10 PM 4 comments: