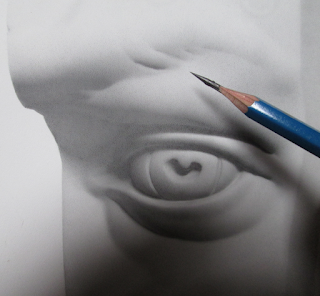 Looking at the point of my pencil, it never ceases to captivate me, the idea of how refined form can possibly become if represented to the precision of that fine tip.  Such wonder lead me through creating this eye cast drawing to investigate the subtleties of form at Grand Central Atelier.  My drawing proceeded by taking time to carefully construct gradations that represented specific curvatures of form one section of form at a time. 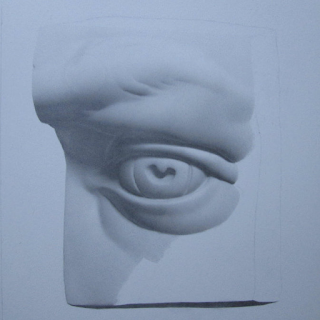 While  making deliberately constructed sections of form allowed me to closely study each forms specific surface, I also had to consider those smaller aspects in relation to the larger forms on the cast.  With this drawing I noticed I was able to develop more of an ability to retain a sense of the structure of larger forms while making smaller changes to them.  Since I put careful thought into the structure of each form as I constructed them, as I refined the form I could gain a better sense of where I wanted the form to develop and which areas that needed to conform to the specific curve of form I intended to make.  However I often lost sense of the larger forms while working on smaller aspects, such as sub-forms like the folds in the eye brow.  A critique from Scott Waddell showed me how to evaluate the form in the simplest possible way in order to regain a sense of the hierarchy of larger forms to the smaller forms that sit on top of them. 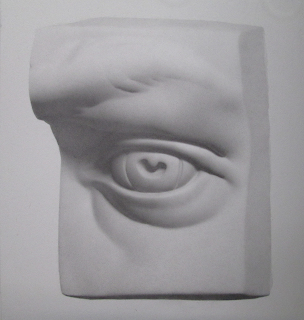 While progressing with this drawing I developed more of an appreciation for the idea that the smaller forms only gain significance when in their proper relation to the larger forms that they depend upon.  Working in a slow form by form method can sometime cause loss of awareness to the integrated nature of form.  But I found that the more time I spend practicing to retain a sense of where I am modeling in relation to the hierarchy of the overall form of the cast I can develop a better sense and ability to properly place smaller forms and larger forms.  I will continue taking time to carefully study form with my upcoming cast projects.

Thanks so much to the great help from all of my teachers for cast drawing, Devin Cecil-Wishing, Patrick Byrnes, Scott Waddell and the teachers who sometimes came by to help and encourage me with my drawing, Josh LaRock, Jacob Collins and Colleen Barry.  I couldn't ask for better instructors.

Posted by Arthur Haywood at 10:32 PM No comments: