A week at the Grand Central Atelier

To offer some insight into my daily experiences at the Grand Central Atelier I am sharing a post that describes a recent week at school that was very helpful for me.

Classes for the core program are in session from 8:30 am - 5:00 pm.  As a first year student I draw from the cast in the morning until 12:30 before having lunch in the school's kitchen through 1 pm when I return to the cast hall to practice block-ins until 5 pm. 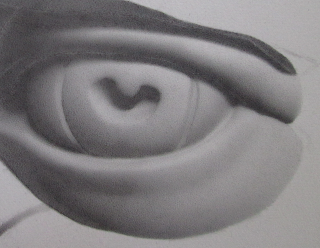 Near the beginning of the week I received valuable advice one of my cast drawing instructors, Patrick Byrnes.  In my drawing the light indentation on the eye initially suggested more of a scoop than was actually apparent on the cast.  Patrick informed me of how to more accurately describe that area by slightly lightening the darker part of the form to turn the form more towards the light. While I draw my cast during the weekday mornings I also usually can overhear the advice from instructors, Jacob Collins, Ted Minoff, Will St. John, Josh LaRock and Scott Waddell as they teach the 2nd through 4th year students in the figure room,  and from Tony Curanaj in the still-life room on some afternoons. 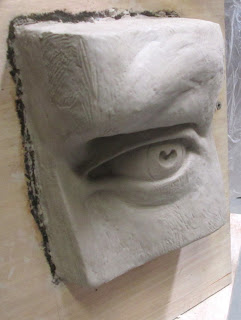 One day a week in the afternoons, first year students sculpt copies of casts in clay.  My sculpture teacher Zoe Dufour has been helping us with sculpting. I am sculpting from the same eye that I draw from in the mornings. A picture of us working on cast sculpture can be seen on the GCA instagram page here. This practice has helped me to gain more of an understanding of the three-dimensional nature of form and encourages me to apply sculptural considerations to assist me in modeling form more specifically while drawing in graphite.  Since drawing at GCA is approached through the concept of turning forms darker in relation to how much form turns away from the position of the light source, drawing is essentially sculpting with pencil. 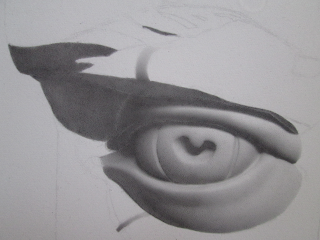 When Devin Cecil-Wishing, one of my cast drawing instructors, came by the cast hall I was about to begin modeling a new form.  I was initially planning to model the lower form underneath the eye, (and a strip of form can be seen where I started working in that area) but after Devin's recommendation to model the lower brow I decided to model that form.  Since the form of the lower brow is connected to a shadow edge it is easier to make a gradation out of that shadow.  Also, it was helpful advice from Devin to move to the forms above the eyelid since they are more curved than the forms below the eye, which allows for an easier task of modeling form where the curvature of form is easier to see.  Since the cast hall is lit by light coming through a large window some of the forms on the cast that are not as round appear even more subtle under the natural light.

Later in the afternoon I took a break from practicing block-ins to see the work in progress from Colleen Barry's stucture drawing class.  It was very informative to see the work 3rd and 4th year students were making in that class and to learn about how they were approaching figure drawing through discussions with them.  The information I have been learning about the figure and form has been beneficial to me while I work on a portrait commission painting after school during the week nights.  One night one of the cast drawing instructors, Justin Wood, was able to stop by the studio in the school that I was working in and offered some very helpful advice on how I can reference master paintings to assist with painting my portrait commission.

Later in the week while I was drawing my eye cast in the cast hall, I could hear the echoes of Scott Waddell's advice in the morning coming from figure studio.  I decided to take a break from my drawing to see how the 2nd year students were progressing with their figure drawings.  I was amazed to see how refined their drawings were turning out during the second week of their month long pose and gained insight into how they pace themselves on their drawings. 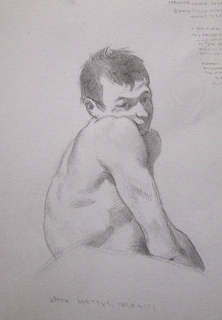 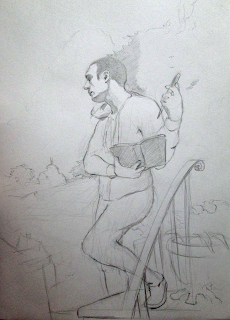 During my lunch breaks I have been working on master copies while I eat.  Anthony Baus has an incredible library that he left the school in his Perspective Lab.  I have been utilizing some of his books to make master copies, such as the Carracci copy shown above.  These studies from 17th century artists has given me insight into how I can develop my own compositions, such as the one shown above on the right.  On my way back from lunch I walked past the gallery within GCA, Eleventh Street Arts, and was very inspired by the still-life show on view.  With a greater sense of how my studies are leading to more expressive works of art, off to the cast hall I returned to practice block-ins for the afternoon.

My cast block-in instructors, Brendan Johnston and Scott Waddell, come by during the week to give us 1st year students very helpful advice on how to approach making proportional drawings, called block-ins.  Now we are working on the practice of "tippy casts".  With this exercise we tip the casts at various angles that make the object less recognizable.  Through representing the shapes students can develop the ability to accurately copy shapes that are seen, without being influenced by the idea of trying to make a drawing that leans towards the symbolic idea of what one expects a face to look like.  While Scott Waddell and Brendan Johnston are in the cast hall I am also able to benefit from hearing the painting advice they give to the 2nd year students who are working on cast painting and I can watch as they demonstrate painting techniques on student's cast paintings to clarify how to model form.

One afternoon Josh LaRock was nice to stop by the cast hall to help us out after he finished teaching the 3rd and 4th year students in the figure room. While giving me advice on how to adjust my block-in, shown above, he suggested that I would benefit from approaching setting up my cast differently the next time.  The cast that I was blocking in did not have large unified light and dark shapes due to how I positioned it to the light and the angle that I was viewing it at.  Practicing tippy cast block-ins with a cast under a stronger lighting effect would make it easier to draw.  Josh's advice made sense to me that the practice of comparing shapes is easier to manage when the shapes are split into large and obvious light and dark shapes.  Later that afternoon I could hear some excitement from the figure room that the 3rd and 4th year students were painting in and stopped by to find that they were remarking on a figure painting that Josh LaRock brought to the studio.  Viewing the amazing figure grisaille painting of "Sheena"  that he made while he was a 2nd year student at GCA left me feeling so inspired and lucky to study at GCA.

By 5 pm  the ringing of the timer from the figure studio sounded and I could hear the 3rd and 4th year students thank the model for posing.  With that, the weekend has just begun, with more tales from the Grand Central Atelier to come when this cast drawing is done.