One Plane At A Time 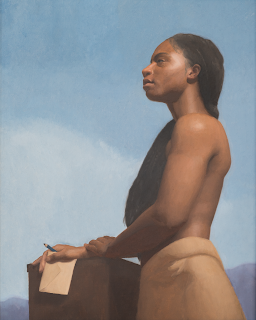 I have been learning a step by step approach to color painting at Grand Central Atelier that I used in creating my painting "Hope Floats".  This post outlines steps I used in the process of this painting.

I began the process by making a small simplified color study of the model and background.  In this color study I applied broad planes to describe the form and light effect.  For each plane I interpret its color based based on 3 aspects, Hue, Value and Intensity (Chroma).

Hue -  Includes colors that range from yellow, red, purple, blue and green.
Value- Lightness or darkness of a color.
Chroma - Intensity of a color from neutral to most intense.


More examples of how I adjust colors according to these three properties is described in a previous blog post I wrote here. 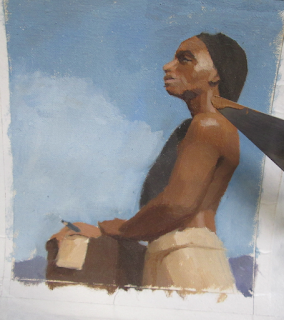 I use the color study as a map for the organization of my final painting.  In my final painting process I work slowly on one form at a time and reference the larger organization of the color study to help me stay on track.  I use the colors of the planes in my color study to set up my palette.  I use a palette knife to mix piles of paint that match the large planes of color for a form on my color study.  The range of these colors can be viewed as stepping stones along a path of form.  I often match my mixtures to the color study by not only holding my palette knife up to the study but also by placing a dab of paint onto the study to see if it blends in.

Setting up the Palette 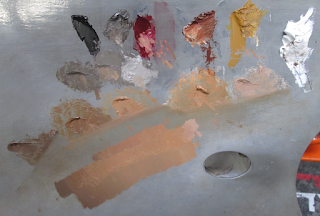 I refer to these mixtures on the palette by considering that if in the color study the large planes were the average of a given area then that color mixture on the palette is at least as light and chromatic as the average color.  Of course I will extend beyond that average mixture as I paint but having it on the palette helps me to stay organized.  Keeping this in mind I set up a string of color, seen in the middle, that links the stepping stones of my mixed piles of paint to create a range of intermediate values.  Below this middle string I use the same mixed colors and add a bit of Raw Umber to the string to neutralize the colors for the option of needing more neutral versions of a color while painting.  With these two strings and the tubed colors on my palette, which offer more opportunity to  adjust aspects of color, I have all the range on my palette needed while painting.  I use the space above my original string to adjust the colors from my premixed piles accordingly to changes I observe on the model.  I often make this area more red in hue and more intense in chroma.

Painting One Plane at a Time 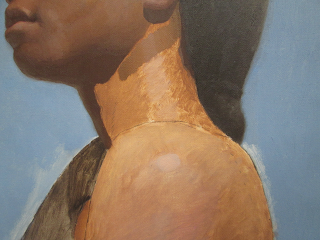 I proceed by starting with the original string on my palette, in the middle, and adjust it as I observe the model.  Although I often stay a bit more red in hue and chromatic in color, for the most part the changes are not drastically different from the original string and I more or less go up and down the premixed original string as I paint the values of form.

To make the process of painting more manageable I approach each form by considering one plane at a time.  Often I first apply the color of the shadow in the shadow area of a form.  Then I begin modeling with the plane on a form that is most faced towards the direction of the light source.  So I start at the top of my premixed string and with each subsequent plane along the curve of form I work my way down the string towards the shadow color.  I consider how much each new plane should bend away from the previous plane to represent the specific curve of form on the model.  With each new plane that tips away from the light most facing area its value and color are adjusted in relation to how much it is tipped away from the light.  I consider the value, chroma and hue of each new plane as I apply them.  I place a priority in focus on value while adding new planes.  The pathway of planes generally continues to curve progressively darker and less intense in chroma until it reaches the shadow edge. 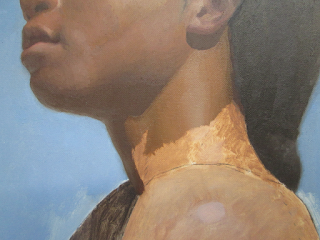 I repeat the same analysis of planes along a new pathway of form just below the previous pathway.  This process continues until I create as many pathways needed to reach the bottom of a form. 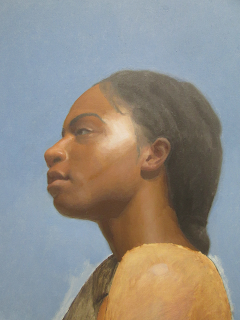 Once the complete form is laid in I can reflect on the larger context of the form and can adjust individual planes that need to bend towards or away from the light, or that need to shift in hue or chroma.  I try to approach this stage of the painting carefully by determining the change that would best refine the form and adjust one plane at a time to move towards improvement.  Although I still struggle with controlling what to anticipate in how much my new decisions may alter the wet paint on the surface I have realized that I have more control over my intentions.  The more clear I can be about what needs to change in an area the closer my intentions are to the painted adjustment and using a system of organization on the palette has made controlling my intentions more manageable.  During this stage I often bend the original larger planes I used on the pathways into smaller planes to refine the curve of form.  But I have found that by focusing on one plane at at time I can focus more on the specificity of changes in color while turning form.

Thanks to the help from all my teachers at Grand Central Atelier who taught me so much about modeling form in value and color this year, Jacob Collins, Ted Minoff, Will St. John, Colleen Barry, Patrick Byrnes, Katie Engberg, Anthony Baus, Scott Waddell, Tony Curanaj, Brendan Johnston, Devin Cecil-Wishing and Justin Wood. 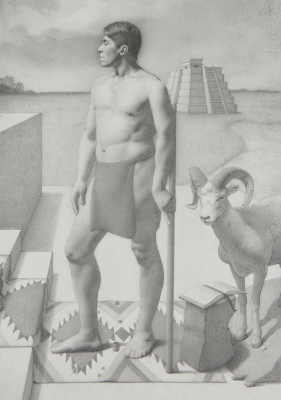 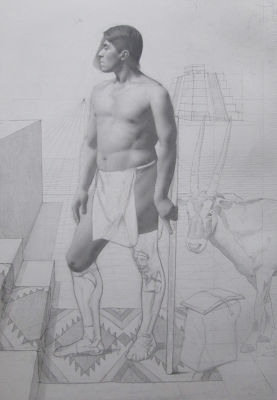 Noble Shepherd, Graphite on Paper, 22 x 15 inches.
This drawing displays a shepherd with a Desert bighorn sheep standing before Mayan architecture based on a building at Chichen Itza, Yucatan.  He is grounded on a Mexican style rug ready to ascend a staircase. I used one point perspective to create an environment in this drawing.  I changed the animal from the Oryx gazelle on the bottom image to the final Desert bighorn sheep because while Oryx gazelles look interesting, they are native to Africa and Desert bighorn sheep can be found in Mexico.  Many are now hunted for their curved horns yet this shepherd stands by his sheep in protection.

A summary of the general process I followed for creating the ground grid and objects in the scene is described in this post. 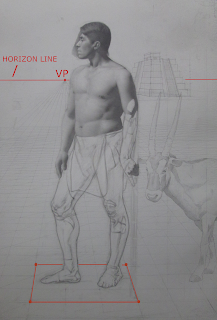 After completing the block-in of the model I began the ground grid by drawing a square around the model's feet.  To do this I first established a horizon line by determining how high my eye level reached on the height of the model from my point of view.  Then I established the vanishing point along the horizon line by determining my position from left to right in relation to the model from my point of view.

I was so close to the model while making this drawing that I was tilting my head up towards the portrait and down towards the feet to see the entire model. So when I used the measurement for the distance that  I actually was away from the model to create the box it resulted in a distortion of the box appearing to tilt too far up towards the viewer's eye, as if the box was not resting under the model's feet but instead tipping forward.  I settled on using a further point of distance to make the box appear tilted further away and appear less distorted.  I checked the box to see if I could believe that it was tilted far enough away for the model's feet to stand on it or if it seemed that the model would fall off, thinking of the box as if it was a surfboard.  I adjusted how far to place the back of the box accordingly for the perspective to appear more believable.

Here is an example of the first stage of drawing the box.  I used a 90 degree triangle to create horizontal and vertical lines.  For the drawing of the model I used a level to establish a vertical line to base other lines off of.  In this example, the point of distance is labeled, D, along the horizon line.  The further to the right the point of distance goes the more the line for the back of the box comes closer to the ground line and makes the box appear to tip further away.

In creating the grid along the ground in my drawing I extended the original box by using the point of distance.  To create each new box I connected a line from the back left point of the box to the point of distance and found where this diagonal met the line going back to the vanishing point.  Then I just drew a horizontal line to this point to create the back of a new square.  I repeated this process for each new square going back in space. 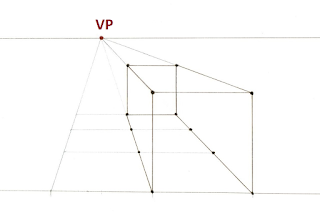 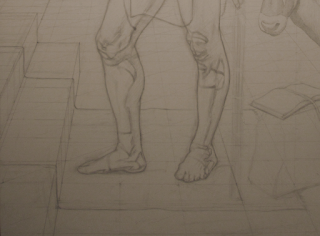 I used the measurements of the tiles along the ground to assist in establishing the dimensions of a rug. 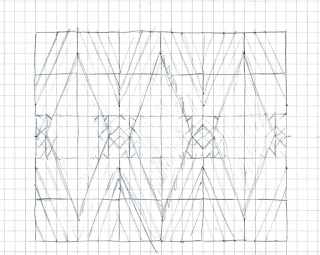 I used graphing paper to determine where important points of the design would meet points along the square tiles for the rug. 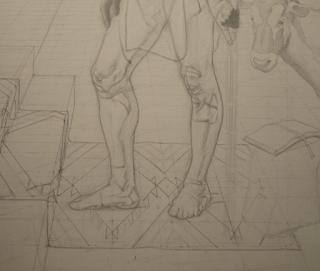 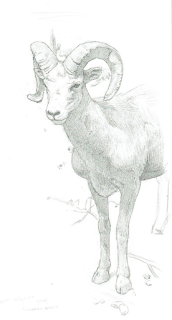 To add the Desert bighorn sheep I made a sketch at The Academy of Natural Sciences to use as a reference and transferred the image to my drawing at a larger scale.

Thanks to all the help in learning about perspective from Anthony Baus in this drawing and in his perspective class at Grand Central Atelier.  I also utilized concepts of one point perspective described in G.A Storey's book the Theory and Practice of Perspective.
Posted by Arthur Haywood at 8:13 PM No comments: 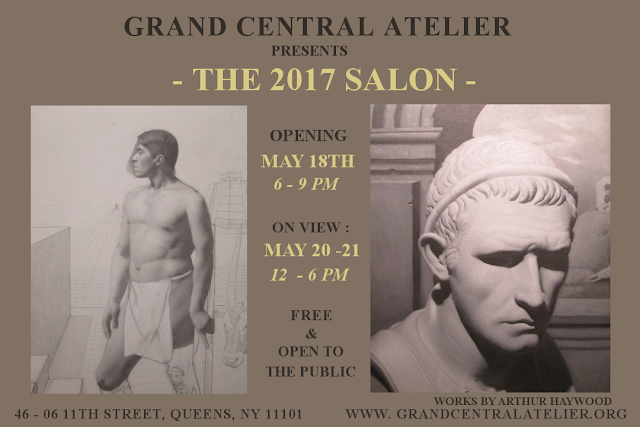 I will have two pieces on display in Grand Central Atelier's "2017 Salon" through May 21st, 2017.  This exhibition will display classical artwork realized in a traditional manner by artists from the Grand Central Atelier.  Please visit, www. grandcentralatelier.org for more information.
Posted by Arthur Haywood at 8:25 PM No comments: