By investigating the structure of a form from many angles one can better decipher how to sculpt the form in one's drawing.¹  I often make wire mesh sketches of the forms that I have been working on during and away from time with the model.  These sketches help to clarify the structure of the forms that I model.  The additional clarity gained from these sketches helps me to better define that structure in my drawing.

Adding Light Logic To The Idea Of The Wire Mesh

The planes on a form have a specific relationship to the light source based on where they are pointing in relation to the center of the light source.  The diagram above shows how the more a plane faces the light the lighter it becomes in value.  Taking this logic to my wire mesh studies has helped me to investigate the orientation of each plane to the light source. 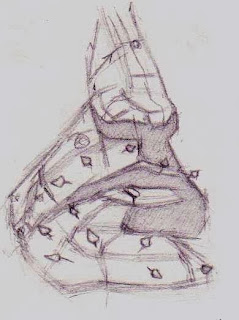 Jeremy Deck recommends that I often make a wire mesh drawing of the planes on a form that I am about to model before modeling a new form.¹  Although the study above was made from one viewpoint, Jeremy Deck also recommends making planar studies of a form while standing in front of the horizontal center of each form to more clearly see the structure of a form.¹  I make tiny directional arrows projecting from these planes to clarify where the planes are facing.¹  When I place these studies next to my drawing before I am about to model a form I can better understand the structure of the form and the form's orientation to the light source.¹  This type of investigation helps in making the modeling process go faster because it reveals information about what I have to  represent before I even attempt to draw it.

The idea of the wire mesh was very helpful to me while working on the drawing shown below. 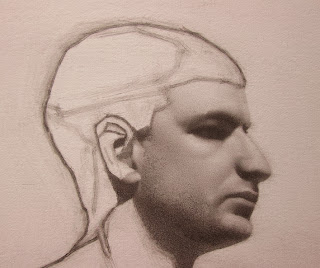