I have been working on this copy of Bouguereau's Gabrielle Cot for a while.  I posted the drawing study that I made for this copy earlier and now will post my process for working on the painted copy.

Materials for copy
Support: Linen, rabbit skin glue (2 coats), Gamblin oil ground (with 1/4 calcium carbonate, 1/8 OMS( the ground was made by first dumping half of the bucket of Gamblin Oil ground on a sheet of metal.  Then 1/2 parts of calcium carbonate was mixed with the Oil Ground.  Then 1/4 parts of Odorless Mineral Spirits was mixed in with the oil ground.  Then that mixture was mixed with the other original half of Gamblin Oil ground.  This mixing was done in only 1/2 of the ground at first to ensure that the materials would be well mixed.), some burnt sienna and ivory black pigment mixed with the ground) applied in 2 coats.

The wood pallet I used that I bought from Utrecht.  My teacher, Lance Moore, told me it was a bit too bright so I don't know if I would recommend it.  But it was great to use a pallete that I could hold in my hand.  It allowed me more flexibility while painting.)
Pigments:
Winsor and Newton- Flake White No.1, Ivory Black

Mediums:
For the ebauche and study- 6 parts gum turpentine, 1 part linseed oil, 3 drops of copal
-This medium is very movable with a fan brush and dries matte. It takes 3 days to dry.  If too much copal is added to this medium additional layers of paint film on top of it have trouble with adhesion and it becomes harder to move it around.
For glazing and painting- 5 parts turpentine, 1 part stand oil, 1 part Damar (1/5 of this part contained gum elemi), 1 drop Siccatif de Courtrai(a 19th century drier composed of lead and manganese). This is a version of the glazing medium that Ralph Mayer states was used as a glazing medium in the 19th century.  From some excerpts from Bouguereau's notebooks that I found in William Bouguereau, 1825-1905: Musée Du Petit-Palais  it is known that he used a little of gum elemi in his glazing medium and he stated that he used 1 drop of Siccatif de Courtrai in his medium. 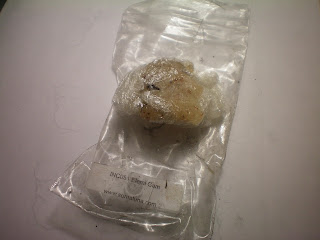 Above is a picture of  the solid form of gum elemi as I received it.  The gum elemi was mixed into the damar varnish by 1st heating the elemi on a stove to remove the impurities.  Then I put what was 1 part of Damar varnish into the pan(I had tin foil on top) and 1/5 of a part of the solid gum elemi into the pan and heated and mixed it until they were completely mixed together.

Step 1: Stretch canvas. I was not supposed to originally stretch the linen too tightly because the rabbit skin glue tightens the linen so much.  Because I did so when I applied the rabbit skin glue it strained the surface so much that there were some tiny holes.  Apply 2 coats of rabbit skin glue to the surface. After glue dried I mixed burnt sienna and ivory black pigment with Gamblin oil ground to produce a light and slightly warm ground color. This was the ground color that I noticed in Bouguereau's studies.  To apply the ground to the surface I thinned out the ground with either turpentine or mineral spirits and applied it to the surface in 2 coats. Light Sanding with 220 sandpaper between each coat. The ground was applied with a brush and then scraped down with a plastic palette knife.
Here are the steps I followed previous to sanding down the surface to start over.
I made a smaller study at 4x6 inches.  I only got about 3 layers into glazing the form up to the light. A picture of it is below with numbers used to label the stages of darkening glazes from 1(for the 1st glaze) to 5(for the last glaze).  I used this study as practice and as a reference for a simplified version of the painting while I was making my copy.  The surface I used for this study was much smoother and was easier to glaze on. 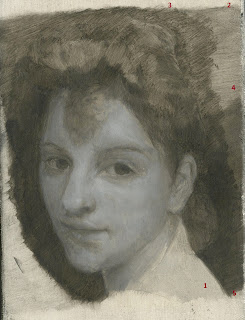 I scanned my drawing study.  I put the print out on a light box and on the back rubbed a 4B pencil along the contour and inside landmarks.  Then I placed the scanned image on top of my surface and used a 4H pencil to transfer the graphite on the back of the paper to the surface.  Because the surface was so textured I had to push pretty hard.  I then inked the drawing with very diluted india ink.  Then I sealed the drawing with a mixture of copal and turpentine(mostly turpentine).  This darkened the lines a bit. The lines were to be light so that they would dissapear after the ebauche.  Bouguereau's method of painting was very atmospheric and a visible contour line would ruin that effect.  Still I think I made it too light because it was difficult to see the drawing as the copy progressed.  An image of the copy at this stage is below. 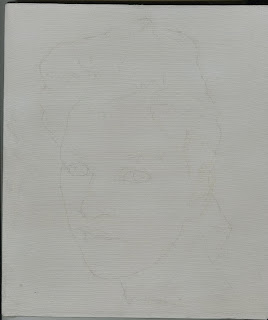 Then I did an ebauche. Below is an image of it at different stages of development.  I initially used hog bristle brushes to sort of rub in the tones on top ground.  It wasn't very dark but was used to set the drawing in place.  In this image it can be seen in the thinner areas of paint. Then I did my ebauche completely thin and then with more paint as I glazed up the lighter areas. 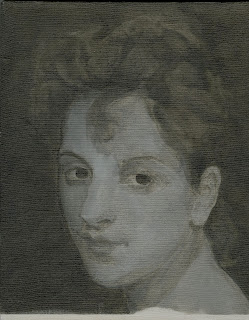 This surface was way too textured for me to deal with so I sanded it down and started over.  An image of the sanded surface is below. 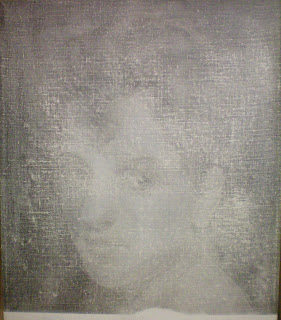 Step 2: Drawing study was scanned and printed full size on regular copy paper. A thin gray mixture of zinc white and ivory black paint was applied on the back of the paper with a bristle brush that contained no medium. The drawing was transferred by pressure of a 4H lead pencil against the oil paint that was underneath the paper. The lines that had pressure applied to them resulted in a transfer of oil paint to the surface. The lines were light in value. Let the surface dry overnight. Went over the drawing with diluted India ink.
Step 3: Lightly scrubbed in the drawing using ivory black diluted with turpentine. Used bristle brushes. Only used a sable brush for edges. The surface was so rough that I had to press hard to see a satisfactory result in values. It was important that this scrub in be dark in values because the original painting was developed from a dark undertone. Because the some linen was exposed from my sanding it sucked up most of the paint in this layer so this layer didn’t get that dark.
Step 4: Ebauche of entire painting again using sable brushes. I made the light areas too dark.  I was supposed to use the grey of the ground as the base tone for the lights but I instead went darker thinking that it would make the lights appear brighter after glazing.  That wasn't true.  Instead, this resulted in me having to apply more layers than I should have to the painting (the image of this ebauche is the image of the example ebauche above).
Step 5: Proceeded with painting by darkening the background and lightening areas in the face. Each session started by couching the area I was to paint with a thin layer of my paint medium. The surface was very textured and I needed it to be smooth to match the qualities of the original so I tried applying the paint in the light areas very opaquely but since I was using sable brushes it never really got opaque enough to be smooth. Made use of sable fan brush to keep the painting atmospheric. I blended down everything while trying to imagine the form of the face as an egg where all of the forms were to be smoothly connected.  For most of the painting I wanted the form to appear soft and smooth.  The rule was, if I could still see strokes of paint then it wasn’t smooth enough and I didn't want to rely too much on the fan brush to make the form smooth. But I did try to follow the types of strokes that I saw in the original by first asking my self how the form turned and then looking to the print to see what type of strokes Bouguereau used to achieve that form. Most of these strokes were blended but some impression of them remained.
Step 6: The painting proceeded with many layers of lightening the form with small value differences between each layer. Each successive layer contained a bit more linseed oil in the painting medium. I always thought I was making too much of a value jump between the layers until I would add a lighter layer on top and see that it was still not light enough. Images of the copy at successive stages are below.  I lost the photos of earlier stages of the copy before I uploaded them to a computer so the process shots below are from about 8 or 10 glaze passes into the copy. 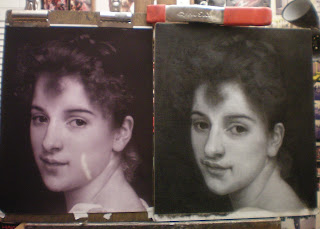 The setup. I got some white paint on the reproduction by accident. 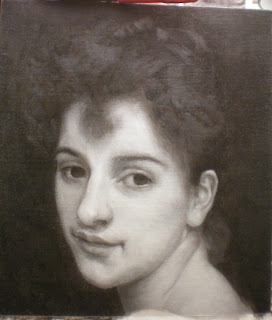 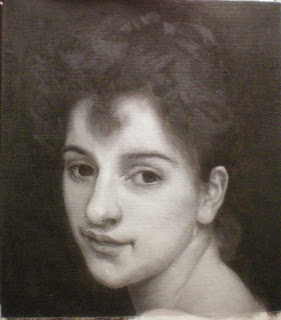 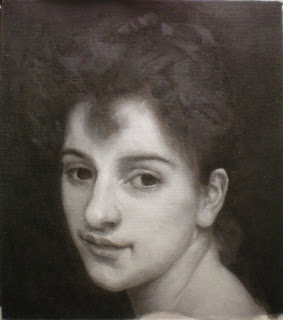 Glazing up the form. I proceeded by glazing up the form area by area and then connecting parts of the portrait from there. For example, working from the forehead to the nose to the cheek etc. 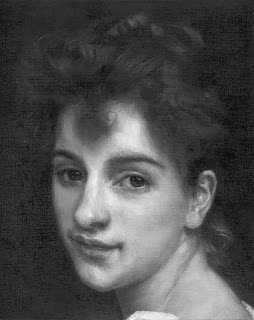 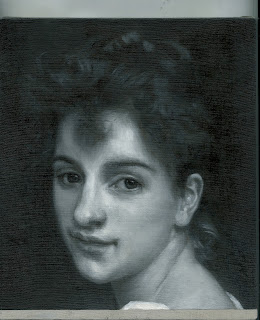 I added the highlights and sharper edges in my last session. I scanned it at Fedex an am hoping to get a better reproduction of it later.  The bottom one is another scan but some reflected light was still getting into it. I still want to work on it more but I have to move on to some other projects now, but I should be able to revisit it before the end of the year.

Below is a better photograph of it. 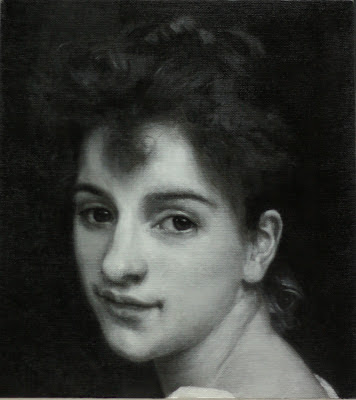