I have been struggling with graphite handling but practicing a few simple exercises has been helpful.  When my instructors at The Cambridge Street Studios suggested that I find out which hardness of pencils easily produce specific values and advised that I practice drawing imaginary strips of gradation, I saw a direct connection to how those exercises would help me to develop control with the graphite medium.  My instructors also suggested ways to manipulate the graphite medium to produce more consistent results, which are described in this post.  Footnotes are included in this post to indicate which sentences in this post are summarizations of ideas that the instructors at The Cambridge Street Studios have explained to me.

Although the graphite medium can be difficult to control, the tools are not the enemy, they are the artist's friends but one just has to get to know them first.  By becoming familiar with how graphite can be manipulated and practicing simple exercises with the graphite medium one can better control the results of one's drawing.

Handling the graphite medium is based on pressure, meaning that the more pressure that is applied to a pencil the darker of a value that is produced.¹  So it is important to know how to manipulate the pressure on one's drawing materials to result in the values that one intends to produce.
There are 4 factors involved in producing and maintaining an intended value with graphite.

-The sharpness of the point on one's pencil.

When initially laying in an area of value it is useful to use a slightly blunt point that has a bit of an edge to it.  Such a point is made by sharpening one's pencil and then rubbing it into the paper until the desired point is produced.  A point like this can easily be pushed against the paper on the flat side to produce an even value, while at the same time one can rotate the pencil to the sharp side to fill in any lighter areas that may have resulted from an uneven application of graphite from the flat side of the pencil.¹
A point that is much duller than the point pictured above will distribute graphite in unintended directions and will produce uneven values.  Also, initially laying in a value with a point that is much sharper than the point pictured above often causes the point of the pencil to grind into the paper, which results in distinct breaks in an area of value.

When tightening up an area of value a sharp point can easily fill in small areas that are too light.¹

-The angle that the pencil is held at. 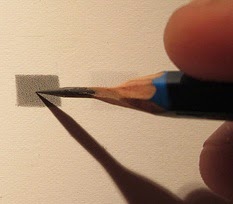 Holding the pencil at a more perpendicular angle to the paper allows for more pressure to be applied, which often produces a darker value.

Holding the pencil at a more parallel angle to the paper allows for less pressure to be applied, which often produces a lighter value.

-The pace of applying graphite. 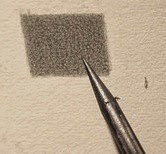 There are 2 factors involved with producing a value with a kneaded eraser.

- The shape of the eraser

A round point on an eraser that is covered in graphite is desired to gently lighten darker areas within a value and the size that one makes the point is dependent upon the size of the area that one intends to lighten.¹

-The angle that the eraser is held at.

By holding the eraser at a more perpendicular angle to the paper one can apply more force to lighten darker areas of value. 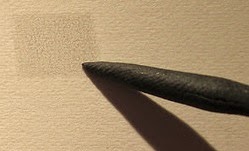 By holding the eraser at a more parallel angle to the paper one can easily apply little pressure to gently lighten darker areas of value. 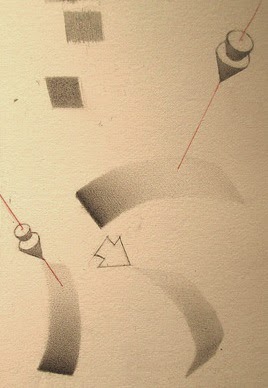 Everyone has their own graphite handling tactics and practicing value scales and drawing imaginary strips of gradation can help one to quickly discover how much one needs to alter the factors for controlling graphite and the kneaded eraser, described above, in order to produce intended values.  These exercises can be completed within any desired time frame as long as one focuses on finding ways to alter one's process to produce a desired result within a set time frame.
After each attempt at these exercises I have found it important to determine why one approach worked better or worse.  Without knowing the reasons for improvement it is difficult to improve consistently.  In my opinion, from my experience, progress from these exercises does not come from mere practice.  Rather, progress from these exercises comes from identifying how one can improve and then applying that knowledge consistently to one's habits.  These exercises have been so beneficial to my understanding of how to control the graphite medium that I wish I had focused on them before I even started my first cast drawing.  I am still looking for ways to significantly improve my graphite handling and if anyone would like to share their graphite handling advice with me please let me know.