I took a cast drawing class at the Grand Central Academy on Saturdays for the month of July. My instructor Justin Wood began by doing a demo of how to block in a cast. 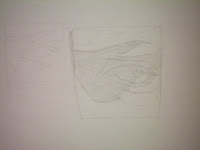 The image to the left is my block in. The process started by first measuring the height and width of the cast by extending my arm and noting the highest and widest points from the tip of my pencil to where I placed my thumb. I then marked proportional width and height marks on my drawing. I also had to find the vertical and horizantal middle to use as a reference point during the block in. Next I worked around the outside contour of the block in trying to get it as accurate as possible. Then I drew the large shapes on the inside. I worked over the block in to find proportions through point to point measurement and judging negative shapes. The block in is purely a 2-D way of seeing, it was not about trying to discover the 3-D form of the shapes yet. Then I filled in the shadow shape with a light wash to better see the relation of the shadow shape in my drawing to the shadow shape on the cast. Then I began to identify large sub forms in the light areas in the same 2-D manner. Justin pointed out that the closer you and your drawing are to the cast the easier it is to see proportional errors when scanning back and forth. 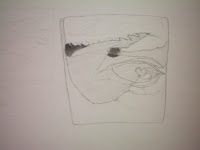 The next step was the contour. I broke down the block in by adding more tilts to it. Drawing the contour was more a mode of 3-D thinking but even with the contour we were to work with straight lines. In the contour we see lines as they are but have to ask for what dimensional reason do they appear that way. This is especially important for areas that are flatter so they can be pushed back into space. Drawing the contour was different from the block in because in the block in I was working all over the form and in the contour I started at one point and developed one dimension at a time trying to make all the tilts accurate and continued until it was complete. Justin reminded me that even when drawing the discrete tilts within the contour to keep in mind the large shape of the block in. The ancients were keen on this matter of sacrificing too much detail for the sake of the general information. Even while working on the contour I still had to examine the negative shapes to make sure that I didn't get away from the general shape of the block in. I was aiming to get my contour as specific as possible before I started the modeling so that I wouldn't have to second guess the areas I would be modeling. Then I began filling in my shadows. Because the light of the page is not as light as light in life I had to exaggerate the value of the dark when keying in the drawing so that the range of values in the lights can be proportional to life. At this point the value of the shadow appeared darker to the value of the shadow on the cast but that was only because I had yet to fill in the reflected light. 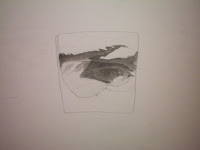 Once I began to fill in the reflected light the value of the shadows began to lighten and I had to go over my terminator again to darken it. Now it was about making the value range in my shadows proportional to life by darkening the reflected light as much as necessary. Justin said that the way students at GCA model form is to roll out of shadows. So I moved down the shadows by rolling out of my terminator towards the reflected light. The shadows were developed form by form. Since I was working from life it was easy to exaggerate the value range within the shadows but Justin urged us to keep our shadows as unified as possible. The shadows are supposed to take on a passive feel without any real hard edges. I mostly used the side of my pencil to fill in the shadows. A lot of information in the shadows is supposed to be generalized. The only place where there should be a hard edge in the shadows is along the contour or where 2 major forms overlap. And in order to make separations between reflected lights and dark accents I had to unify the dark accents instead of increasing the contrast to keep the value range unified. With this method it was important to keep the modeling connected or else when you go to fill in the gaps the values will differ and you will have to draw an area all over again. When Justin came over to review how I had filled in the shadows he noticed that I had made the bottom of the lower eyelid in the shadow a bit too high so he used a kneaded eraser to lower it on my drawing. 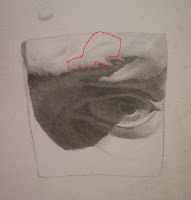 To show me how the lights are to be drawn Justin did a section on my drawing for me to reference to . That is the area within the red outline. I liked that the instructors at GCA sometimes demonstrate on your work instead of just speaking abstractly about concepts. Justin explained that every form is spherical to some degree so the sphere he drew above my drawing was something for me to reference to as I drew the light areas on the cast. Students at GCA also roll out of the shadows in the lights to roll up to the highlights. So pretty much what Justin demonstrated for me was developing a band for a large spherical area by staring at the dark light, rolling up the form and then rolling back down the form. This procedure is repeated until the form in the drawing mimikes the form in life. Justin stressed that it is best to have a plan before going to model in the lights or else you will be drawing aimlessly. Because I was working from life it was very helpful to be able to touch the cast to discover what its form was. Modeling form in the lights is not about thinking in terms of whether to make something darker or lighter but thinking in terms of whether the form is rolling towards or away from the light source. After the band is completed I drew outward from the band to eventually reach the entire form in the lights. 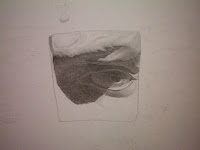 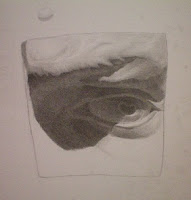 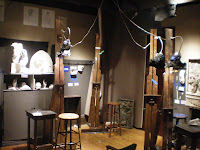 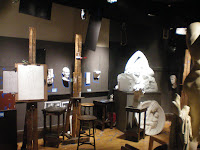 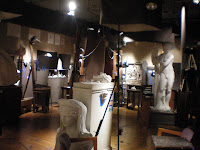 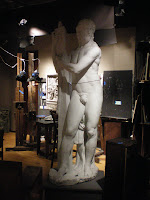 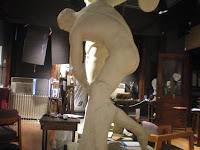