I am very fortunate to have graduated from Grand Central Atelier this Spring.  I have much gratitude to all my teachers throughout the program, Jacob Collins, Colleen Barry, Will St. John, Scott Waddell, Ted Minoff, Tony Curanaj,  Josh LaRock, Devin Cecil- Wishing, Justin Wood,  Anthony Baus, Patrick Byrnes, Greg Mortenson, Katie Engberg, Brendan Johnston, Katie Whipple, Sally Fama Cochrane, Zoe Dufour, Charlie Mostow and Sandra Sanchez, school administrators, Joy, Justine and Mariya, all the fantastic models, inspiring resident artists and fellow students, art history lecturer, Michael Djordjevitch and everyone who has been so supportive of my endeavors, for making my studies at Grand Central Atelier such an amazing experience.  Thank you.  With your help I have been able to significantly improve the technical expression in my paintings.

Below are a few paintings in progress from the past month at Grand Central Atelier.  These pieces are being developed as part of a series on scholars from the ancient library of Alexandria.  The paintings are designed to be compiled into an exhibition and book.  To preview the book, "The Great Library" visit here. 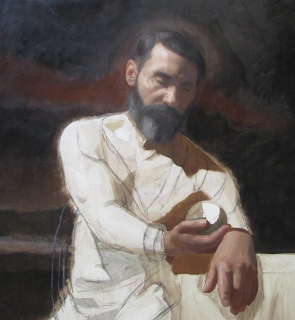 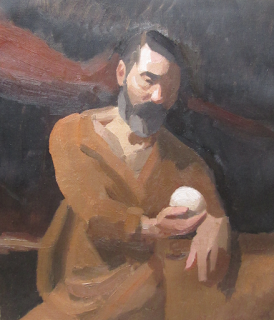 Color study for final painting
Archimedes was one of the ancient world's most revered mathematicians and engineers.  His research into geometrical theories proved  methods for calculating the density of objects.  These discoveries led to calculating the volume of the universe measured by how many grains of sand could fit into it.  His desire to determine a finite boundary was based on a view of the sun and moon rotating around the earth.  The astronomer, Aristarchus, proposed that the earth rotated around the sun and the expanse of the universe to be vastly larger than it was perceived at the time, maybe infinite. 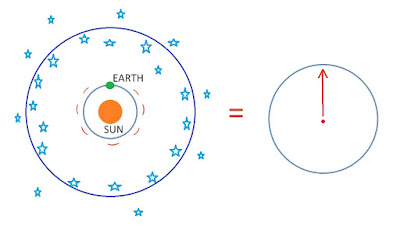 He suggested that the earth's orbit rotating around the sun was so small that it compared to the size the center of a sphere has in relation to its boundary.  A center could be divided infinitely.  Archimedes could not accept the idea of determining the limit of an infinitely large universe that rotated around the sun.  This conflict left the mathematician caught between a finite and indeterminably large view of the universe. 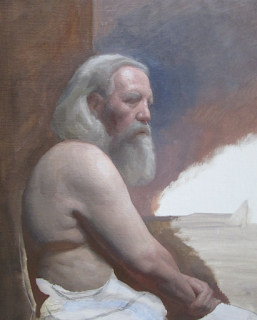 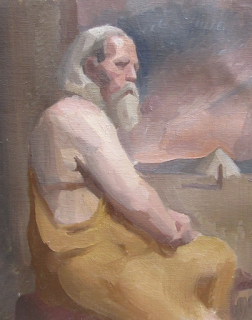 In depth wonder led many scholars from the library of Alexandria to make notable discoveries.  Eratosthenes discovered the circumference of the world. 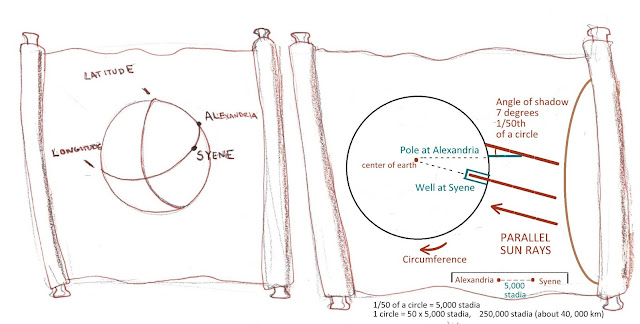 By finding that Alexandria and Syene (modern day Aswan) lie on the same Longitude  he calculated their distance on  a summer solstice.  He began by assuming that the sun was so far away that its rays were parallel.  Noting that the sun cast no shadow in Syene, when seeing a man's shadow block the reflection of the sun into a well, he calculated the angle of the shadow from a stick in Alexandria.  This allowed him to find the proportion of difference in the distance from Syene to Alexandria along the scale of the earth's circle.  He knew the 7 degree angle shown from the shadow in Alexandria to be 1/50​th​ of a circle.  Therefore, the distance from Alexandria to Syene was equal to 1/50th of a complete circle.  By multiplying the distance of Syene to Alexandria, 5,000 stadia, by 50 Eratosthenes calculated the earth’s circumference.
These are only a few pieces of many that are being painted for this series on scholars from the library of Alexandria.  I will post updates as the series develops into completion.  There is much more to come.

Posted by Arthur Haywood at 11:50 PM No comments: 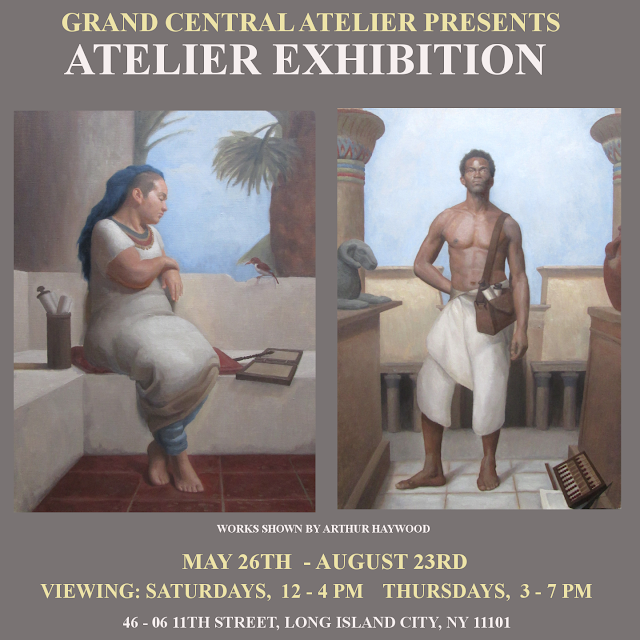 Four of my paintings will continue to be on view in Grand Central Atelier's "Atelier Exhibition through August 23rd, 2018.

The other two paintings on view are shown below. 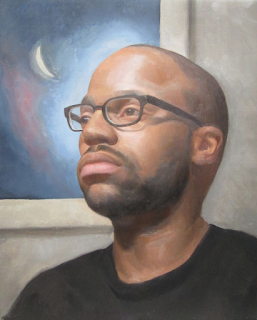 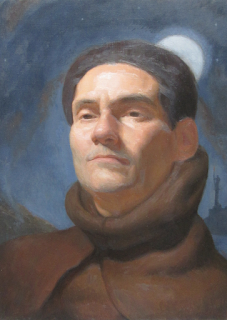 I have been developing a book about scholars from the ancient library of Alexandria.  In the largest library of the ancient world everyone wanted to make the greatest discovery.

Below is a preview of the book.  I am currently working towards completing the remaining paintings for the book. 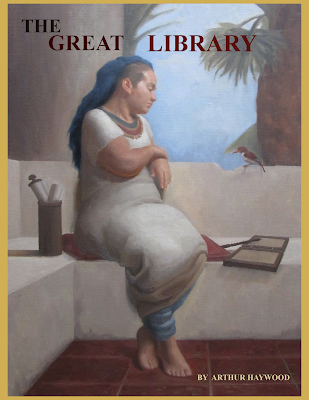 Posted by Arthur Haywood at 8:50 PM No comments: