Comparing The Values Of Planes 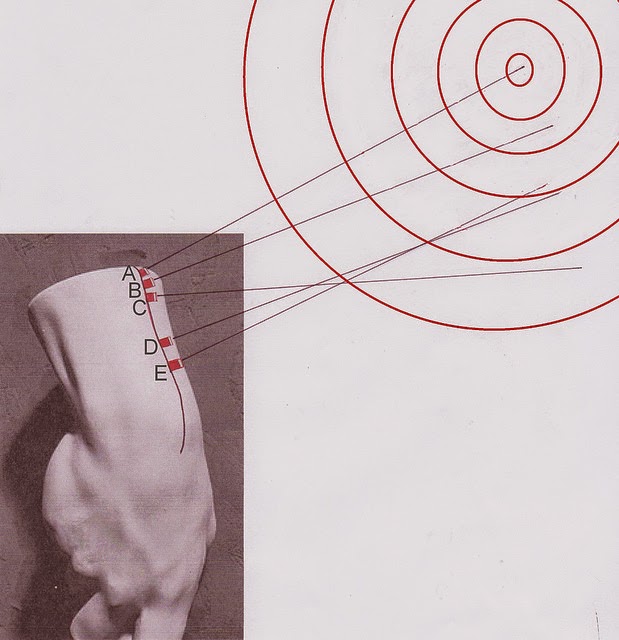 The diagram above shows how magnet A is striking the magnetic field closer to the center than magnet C, because magnet A is facing the light source more than magnet C.  One can imagine the directional path that one would drag a magnet across a form in any direction, whether horizontal, vertical or tilted sideways in order to investigate the position of the high form light on a form.

I used the idea of the magnet and the magnetic field to determine which plane was most facing the light source and then could compare how much the other planes on a form darkened in value away from the high form light plane.  This thought process was also very helpful in managing the hierarchy of value for each of the forms that I tried to represent in my drawing.

The forms and transitions on a cast are made up of planes. A plane is a flat surface of any size that faces the light in a specific direction.

The planes on a cast can be examined down to the point where the planes can be viewed as tiny microscopic planes, known as micro-planes, each facing the light in specific direction.  But this type of evaluation can become so overwhelmingly complex that it can be useful to identify a larger value hierarchy by simplifying the cast into large planes.

By simplifying the planes that generally face in the same direction into larger planes one can more easily get a sense of the effect of light over the entire cast.  Because it can be difficult to pin-point which of the many planes on a cast are generally facing in the same direction it is useful to examine the cast by squinting and looking at it slightly out of focus.  By simply evaluating the large value relationships one can more easily determine which planes are grouping together in value because they are facing in a similar direction.  I referred to the study shown above throughout the process of modeling my cast drawing when I was concerned with the large relationships on my drawing.
Posted by Arthur Haywood at 10:33 PM