I used a certain process to prepare the surface of the canvas for a commissioned portrait painting that I am currently working on.  The dimensions of this painting are life-size so I had to stretch a large  canvas.  I used an unprimed Utrecht medium texture cotton canvas for this surface.

To prevent the stretcher bars from bending as pressure would later be applied from stretching and preparing the surface of the canvas I used cross bars (that I used from a store bought canvas that I previously had).  These cross bars were either nailed or screwed into the frame of the stretcher bars. 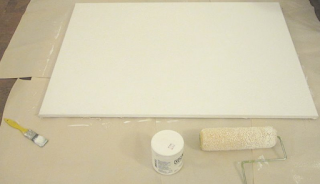 After the canvas was stretched I applied a layer of acrylic gesso, using the Golden brand of gesso.  This layer was applied by laying the gesso on the canvas with a brush and then using a roller, in a perpendicular direction to the brush strokes, to flatten out the texture of the surface.
The surface was then sanded with a 220 grit sandpaper and the process was repeated twice. Once much of the space between the strands of fabric on the canvas were filled in with gesso from using the roller, I used a process to make the surface much smoother. 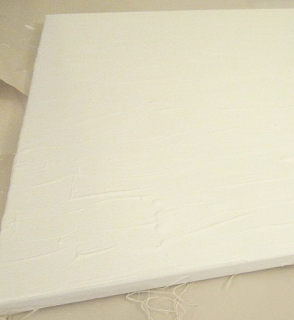 I first applied a large viscous amount of gesso to the surface using a brush.  Then I quickly used a plastic taping knife, shown below, to drag the wet gesso across the surface while trying to hover over touching the previously dried layer of the canvas in an effort to create a smooth surface. This process of using a plastic taping knife is somewhat similar to laying down an area of concrete.


Then I transferred the drawing to the surface using an oil transfer method (Doug Flynt explains this process on his blog here).  The process of surface preparation that I used created a much smoother surface to paint on than the texture of the canvas that I started with and was much cheaper than using a large amount of expensive linen.
Posted by Arthur Haywood at 6:54 PM