A Theory On Representing A Local Color 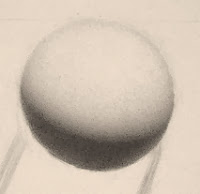 Although one has to deal with a limited value range while drawing on paper, there are ways to manipulate the medium of graphite to better represent an objects' local color.  My instructor, Jeremy Deck, has recently informed me of a way to represent an object's local color with the limited medium of graphite.  This post is an explanation of my understanding of that process.  Footnotes are included in this post to indicate which sentences in this post are summarizations of ideas that Jeremy Deck has explained to me.

By specifying three modeling factors I have been able to better represent the local color of the forms that I see.  These factors include, the value of the highest form light, the distance of the halftone before the terminator and the value of the shadow.¹ 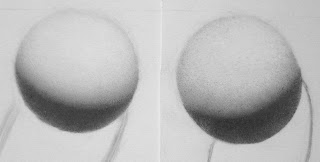 *Blog Note- Some of you may have noticed that the information in this post has changed from its original post on 11/17/13.  I have found that my explanation did not follow the laws of physics and had to update it.  I apologize for the incorrect information in the original post.  I am still trying to comprehend how the eye processes light and how that effects the way a local color is perceived.  As well as a better way to represent the local color of the forms I draw.  If anyone would like to share some insight with me please let me know.